The first step in protecting against any animal disease is to know what causes the problem.  This is especially true with leptospirosis.

Leptospirosis is an infectious disease caused by Leptospira bacteria. Two different strains affect cattle in Ireland – L. interrogans and L. borgpetersenii.  Annual vaccination is a crucial part of the armoury in controlling this highly infectious disease but in order to give full protection to animals it is vital to vaccinate against both strains of bacteria that cause the disease.

Dairy and suckler farmers should therefore ensure that the vaccine they use is effective against the two strains that affect cattle in Ireland.   Leptavoid H is the only vaccine licensed to protect against both Leptospira hardjo strains.

A study on clinical leptospirosis carried out by the Veterinary Research Laboratories at Stormont showed that L. interrogans was responsible for three out of every four infections (see Figure 1).  Leptavoid H is the only vaccine that protects against this strain.  It also protects against the second strain, L. borgpetersenii. 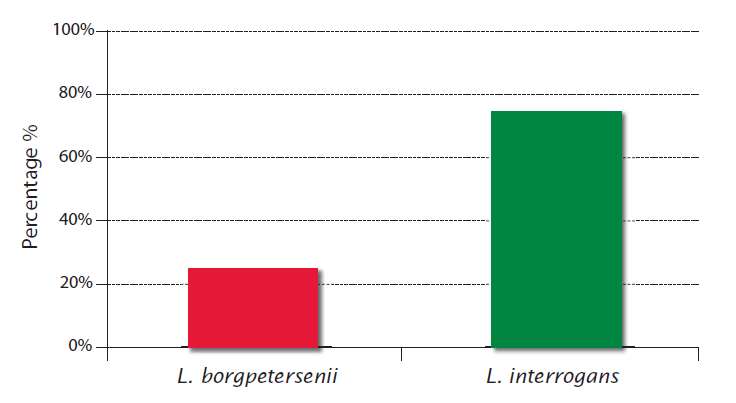 The Northern Ireland survey showed that the strain L. interrogans was responsible for 76% of leptospirosis infections. Bovilis Leptavoid H is the only vaccine that protects against this strain. (Ref: Ellis, Rec. Vet. Sci. 1988 p375-379)

Rampant in dairy and suckler herds

Research has shown that the vast majority of dairy and suckler herds are exposed to leptospirosis infection.

Analyses by veterinary laboratories both here and in Northern Ireland in 2010 showed that, after Salmonella dublin, evidence of leptospirosis was one of the most common findings in aborted foetuses.  Without the widespread vaccination undertaken by dairy farmers during the past decade, this figure would be much higher.  The level of vaccination in suckler herds is still low.

Vaccination and control strategy for Leptospirosis

Vaccination, ideally before animals are exposed to the bacteria, is key to controlling leptospirosis.

She advised that Bovilis Leptavoid H can be used at the same time as Bovilis BVD, the vaccine used to prevent BVD, another common cause of abortion in cattle.

Highlighting the need for good bio-security, she said that buying in cattle, access to water courses, using a stock bull and co-grazing with sheep can increase the risk of leptospirosis.

“In addition to vaccination, operating a closed herd policy, cutting off access to communal water courses and wet areas surrounding streams, keeping contact between sheep and cattle to a minimum and making sure all bulls are free of leptospirosis are all very important in the control of this deadly disease,” she said.

Symptoms of leptospirosis include abortions, the birth of weak, dying or dead calves and returns to service and infertility.  Other clinical signs include a sudden drop in milk yield, fever and loss of appetite.  The disease is often unnoticed by farmers because they identify the problems as poor fertility, repeat breeding and returns to service.

The bacteria settle in the reproductive tract and the kidneys.  Infection is passed through contact with urine, placental material or the aborted foetus of infected animals as well as through contaminated water.

Leptospirosis is a serious risk to farmer health

Leptospirosis is a serious risk to farmers, vets and others in contact with infected animals, said veterinary specialist Fergal Morris.

“It is spread through contamination of the eyes, mouth, nose or cuts on the skin, usually from the urine of infected cows.  It causes flu-like symptoms, with chronic headaches.  Joint and muscle pain, with depression and listlessness are often present. In some cases, it can be life threatening,” he said.

He referred to the Health Protection Surveillance Centre’s 2011 annual report which showed that Ireland had the third highest level of reported leptospirosis incidence in humans in the EU.  Over 40% of the cases in 2011 involved infections acquired by farmers or others in contact with farm animals.

“One in nine dairy farmers and one in 25 beef farmers has been found to be positive when tested for leptospirosis exposure. This further emphasises the need for a rigid annual herd vaccination programme and for using Bovilis Leptavoid H, the only vaccine that protects against both Leptospira hardjo strains,” said Fergal Morris, who is director of MSD Animal Health’s ruminant business unit in Ireland.