It`s Time to Tackle Lamb Losses in Your Flock

Maintaining the output per ewe as well as the output per hectare are key to ensuring a profitable flock. Losses between scanning and sale can impact heavily on the economic viability of a flock. It has been proposed that the perinatal loss of a single lamb equates to the cost of maintaining the dam for a year plus the cost of mating!1 Approximately one-third of lamb losses occur between tupping and scanning, resulting in barren ewes, one-third occur due to abortion or stillbirth and the remaining third are due to neonatal and post-turnout loss. 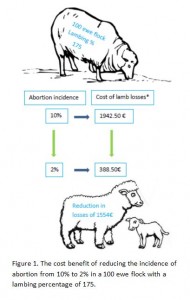 At what stage should I be concerned?

Many farmers accept barren ewe and abortion rates of between 5-10%. However, a combined rate of 2% is likely to be due to an infectious agent and should be investigated so that control measures can be put in place to get things back on track.

What is the cost benefit to decreasing the abortion rate to < 2% in a flock? 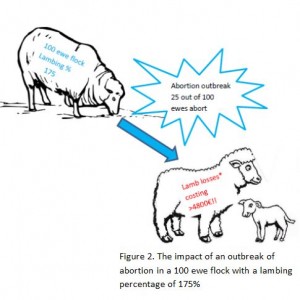 Reducing the chance of an outbreak in higher risk flocks, such as those buying in replacements, is also important.  Should an outbreak of abortion occur in the aforementioned flock with a lambing percentage of 175%, where, for example, a quarter of the ewes in the flock abort then income is immediately reduced by over €4800 (Figure 2). This is even before other hidden costs are considered. (Table 1) 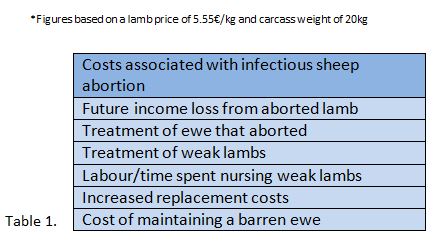 With the costs of abortion an obvious drain on the production system, planning control measures, including biosecurity and vaccination, become key to maintaining profitability of the system.

Reducing the chance of an outbreak in higher risk flocks, such as those buying in replacements, is also important.  Should an outbreak of abortion occur in the aforementioned flock with a 175% lambing percentage, where, for example, a quarter of the ewes in the flock abort then income is immediately reduced by over €4800 (Figure 2). This is even before other hidden costs of infectious abortion are considered. (Table 1)

Analyse farm data so you can benchmark yourself against flocks in a similar management system. In order to do this you need to have been recording your losses thoroughly. Record the numbers of lambs lost and the reason for the loss if it is known. Compare scanning, lambing and rearing records to previous years to assess how the farm is currently doing. Knowing the lambing percentage and the incidence of abortion in the flock will help you work out the cost benefit of implementing a vaccination programme to protect the flock against abortion in future seasons. In the example above, the money saved by reducing the incidence of abortion from 10% to 2% greatly outweighs the cost of vaccinating the flock against the two most frequently diagnosed causes of abortion in Ireland, namely toxoplasmosis and enzootic abortion (EAE). It is important to diagnose the cause of abortion before embarking on vaccination however.

So what can you do now?

Getting a diagnosis for the cause of abortion in the flock is vital.

Control measures for abortion vary depending on the underlying cause. Appropriate control measures cannot be implemented if the cause of abortion in the flock has not been identified. If over 2% of ewes have aborted during the lambing period or when clusters of abortions occur material should always be submitted to the laboratory. Abortion material (both the foetus and the cleanings) should be double bagged, labelled and sealed before submission. If submitting material from several ewes, keep each sample separate from that of the previous ewe. Persevere – the more samples you submit, the better chance you have of getting a diagnosis and implementing the most cost beneficial programme possible.2 It can be useful to have problem ewes (ewes that aborted or were barren) blood tested. This can give an indication of the diseases to which the flock has previously been exposed.

Most common causes of abortion in Irish flocks.

Toxoplasma gondii is the most commonly diagnosed cause of ovine abortion in Ireland and in the most recently published report, was diagnosed in 26% of samples submitted to the regional veterinary laboratories. Chlamydophila abortus, diagnosed in 18% of cases, is the second most common cause3.Other less frequently diagnosed causes include leptospirosis, campylobacteriosis, salmonellosis and listeriosis.

Toxoplasma gondii is a protozoan parasite. Eggs are shed for approximately one week in cat faeces before the cat becomes immune. The cat is then no longer a source of infection as long as the cat remains in healthy condition. Toxoplasma eggs are eaten by ewes in feed, forage or on fields contaminated by cat faeces. Sheep and mice are classified as intermediate hosts for the parasite. Mice, therefore, act as a source of infection for the cat. 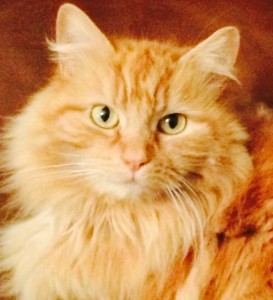 Signs depend on the stage of pregnancy at which a ewe is infected and include one or all of the following: barren ewes, mummified foetuses, aborted freshly dead lambs or weak lambs with a high neonatal mortality rate. In chronically infected flocks the abortion or barren rate is highest in ewe lambs or hoggets and lowest in older ewes while in newly infected flocks, all age groups can be affected.4

Keep feed bins and hay sheds secure so that they cannot be accessed by cats.

Keep an adult neutered cat on the farm as this will deter other, potentially naive cats, from wandering into the area and continuing the cycle of infection.

Feed hay or straw bales from the top of stacks to cattle rather than sheep as this is the most likely area to be contaminated by cat faeces. Infection with Toxoplasma gondii rarely, if ever, causes abortion in cows.5

Vaccinate replacement ewe lambs and hoggets to protect against infection prior to tupping. This will mean planning ahead so it is important to consult your veterinary practitioner for advice on correct administration and timing of vaccination.

Ewes that have aborted due to toxoplasmosis are considered immune and can be retained for breeding the following year.6

Abortions in the final 3 weeks of pregnancy are usually the first signs of EAE in the flock.6 Ewes may stop eating and a red 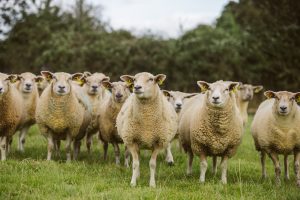 vaginal discharge may be seen three days before the ewe aborts.4 Aborted lambs are usually well developed and quite fresh indicating recent foetal death.6 Commonly full term stillborn or weak lambs are born that are unable to suckle. Often ewes show no signs of illness at all accompanying the abortion.

Keep a closed flock – do not buy in. Immediately isolate all ewes that abort. Remove aborted foetuses, cleanings and bedding and dispose of appropriately. Treat the remaining flock with antibiotics, if advised in consultation with your veterinary practitioner. Do not allow other ewes or lambs to lick or smell a weak lamb or aborted foetus.

Infected ewes can shed the bacteria at subsequent lambings and so remain a potential source of infection to the flock. These ewes can be culled, however, it is usually not economically feasible to do so. Ewes that abort once will not abort again in subsequent years.6

Vaccinate to protect the flock against EAE. Again, it is important to consult your veterinary practitioner for advice on correct administration and timing of vaccination.

Vaccinating will reduce the number of abortions caused by Chlamydophila abortus infection on the farm.

The first step in controlling lamb losses is to benchmark the flock. Once this is done consult your vet for advice on any diagnostics that may be needed to determine the cause of the losses. Persevere and continue submitting any aborted foetuses, including the cleanings, to the laboratory. Once a diagnosis has been confirmed, plan a control strategy. This will often involve vaccination against either toxoplasmosis, EAE or both. Reducing the incidence of barren ewes and abortion to <2% is achievable and will increase the output per ewe and the overall profitability and sustainability of the flock.