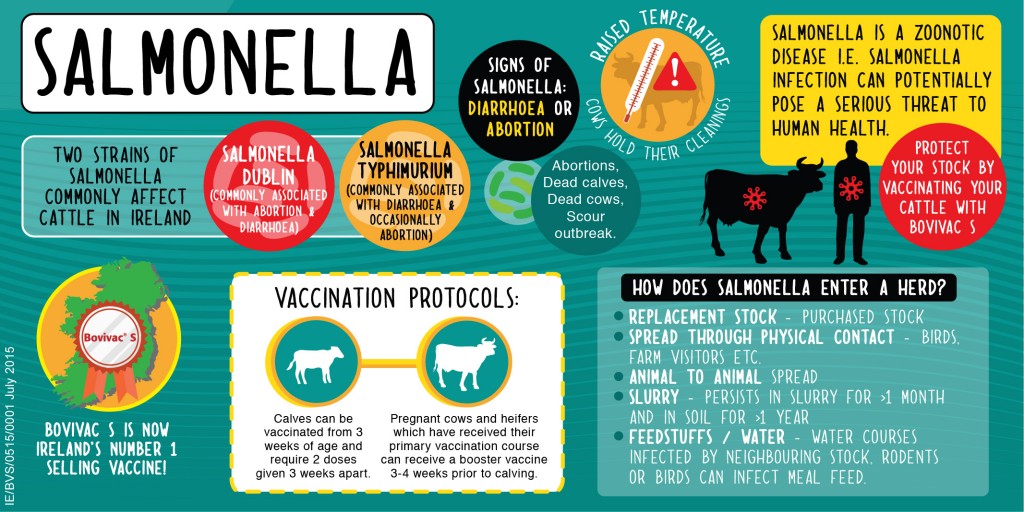 Salmonellosis is a disease caused by bacteria, of which numerous types exist. In Ireland cattle are most frequently infected with two types of Salmonella species, Salmonella dublin and Salmonella typhimurium.

What are the signs of salmonellosis?

Infected animals can suffer from diarrhoea or abortion. In most herds either one syndrome or the other is seen. Less often, herds show signs of both syndromes.

Signs of diarrhoea in affected cattle can be mild but frequently animals have a raised temperature, extremely watery diarrhoea, are dehydrated and can die as a result.  A condition seen in calves on farms with endemic infection is called Terminal dry Gangrene. Affected animals may not have previously shown any signs of scour but after an outbreak these calves develop gangrene of the feet, tips of the ears and the tail. Carrier animals can be a source of infection to others and these carrier animals are more likely to shed Salmonella during periods of stress such as at dry off or housing or if affected by other diseases such as BVD or liver fluke infestation. Chronic cases of salmonellosis may appear as ill-thrifty animals.

Usually, abortion associated with Salmonellosis occurs in cows infected with Salmonella Dublin in Ireland. Timing of Salmonella associated abortion is from the fifth to the eighth month of pregnancy. Infection of the aborting cow can have occurred up to 12 weeks before the abortion is seen.  Aborting cows are often sick with a raised temperature and hold their cleanings. Some cows do die as a result of this infection.

Send all aborted calves and their cleanings to the lab for post-mortem examination and testing. A blood sample from aborted cows can be useful for analysis. Salmonella species can be detected from dung samples but often the number of bacteria shed in faeces can be quite low which can make detection difficult. Isolate suspected cases and contact your attending veterinary surgeon for best advice.

Control of Salmonellosis in cattle

Ideally infected or carrier animals should be culled. However, detection of carrier animals is extremely difficult rendering this aspect of control difficult to apply on farm.  Herds which purchase animals are at risk of purchasing carrier animals. Contact with neighbouring cattle also increases the risk of spread so maintenance of boundary fences can reduce the threat of introduction of disease. Visitors should be kept to a minimum on farm and access to stock restricted.

Vaccination is available in Ireland to protect cattle against the effects of infection with both Salmonella Dublin and Salmonella typhimurium. Calves can be vaccinated from 3 weeks of age and require 2 doses given 3 weeks apart. Pregnant cows and heifers which have received their primary vaccination course can receive a booster vaccine 3-4 weeks prior to calving.

Salmonella infection can potentially pose a serious threat to human health. Control of disease within a herd therefore protects both the stock and the stockperson. Surveillance of the herd disease status by testing of aborted calves or affected animals allows prompt diagnosis and is a useful monitoring tool. Biosecurity measures including maintain a closed herd and good boundary fences further protects the herd. Vaccination provides the animals with immunity to reduce infections and may reduce Salmonella typhimurium contamination of the environment.

Infected animals can suffer from diarrhoea or abortion.